Statistics Canada’s Labour Force Survey for July examined Canada’s labour market conditions during the week of July 11 to 17. During this week, public health restrictions across Canada were significantly reduced due to low case counts and high rates of vaccination.

Canada added 94,000 jobs in July, putting employment 1.3 per cent under February 2020 levels. Gains were concentrated in full-time work, especially in the private sector in service industries. Unemployment fell to 7.5 per cent, matching the rate in March.

Statistics Canada refers to immigrants who have landed within the past five years as “very recent” immigrants. The numbers in this group have taken a hit since the border closed in March 2020.

The employment rate for very recent immigrants has been on an upward trend throughout the pandemic, because their numbers are falling faster than their employment rate. In other words, they are not necessarily getting employed more often than they were in pre-pandemic times.

In July, the employment rate for very recent immigrants was up to 69.1 per cent, up one percentage point from June.

Among immigrants who have been in Canada for more than five years, employment was 58.1 per cent in July, down a fraction of a percentage point compared to June.

The number of very recent immigrants who were participating in the labour force ballooned from more than 612,000 in 2016 to 751,000 in 2019. Growth stalled in 2020 as a result of travel restrictions, and other coronavirus-related measures. 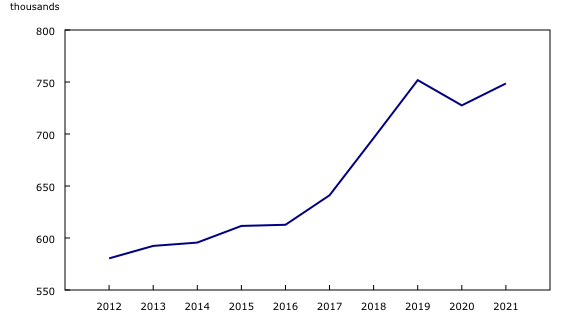 However, this year, the number of very recent immigrants participating in the labour force has returned to 2019 levels, making up almost 4 per cent of the total labour force between January and July.

Immigration in Canada is oftentimes discussed as a strategy to address Canada’s demographic challenges. Canada has an aging population, and a low birthrate. These elements combined mean that the labour force is shrinking, and there is not enough natural growth to make up for the losses. Without immigration, and other strategies to support labour market gaps, Canada’s economy will not remain as internationally competitive in the long run.

Travel restrictions did start to ease at the end of June, when the border reopened to approved permanent residents. That month, Canada welcomed 35,700 new permanent residents, more than any month during the pandemic. The number of new immigrants admitted in July is not yet released.

As travel restrictions ease further, Statistics Canada says its Labour Force Survey will monitor whether the number of new immigrants participating in Canada’s labour market will continue to grow.